Running poles for mountain runs and harsh terrain use. 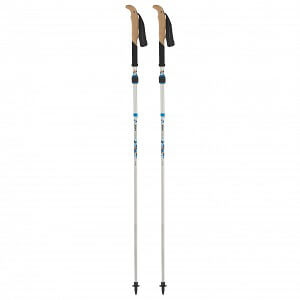 Running poles for trail runners assist the runners on exhausting trail running trips over harsh terrain. Running poles spread the activity load of the runner from just the legs across the entire body. To borrow a metaphor, the runner switches from rear wheel drive to all-wheel mode. This eases the strain on the knee and ankle joints to more sustainable levels and on top of that adds additional forward thrust from the arms and upper body. The impact reduction is particularly notable during long descents.

To take up as little space in the bags as possible and make carrying them in the backpack easier, running poles can be folded or collapsed down to very compact sizes. Folding poles are usually made of three to four lobes that can very quickly be made ready for use. Depending on the model, folding poles are offered in set lengths or with a small adjustment range to set the running pole to the perfect length. Collapsible poles generally have a wider adjustment range and are also made of three to four individual lobes. They are locked in place with clips or by twisting.

After choosing between a pole built to fold or collapse and selecting the desired material, trail runners also get to choose from a range of handles for their trail running poles. Cork, plastic and foam grips are the options on offer that are used by the majority of running poles. Additionally, the handles are fitted with different designs of hand straps, some of which are adjustable or removable. The top end models of running poles are supported by their companies with an extensive range of accessories. This includes spare parts as well as various tips, rubber buffers, baskets and hand straps. Matching gloves for use with running poles as well as bags for transport and storage are also amongst the many handy accessories on offer.