In 1862, Kaspar Tanner founded a ropemaking company, which later on became Mammut. Today, the innovative company develops, manufactures, and sells alpine, outdoor, and winter sports products. In addition to the 200 employees working at the headquarters in Seon, Switzerland, the Mammut Group has offices and subsidiaries all around the world. » Read more 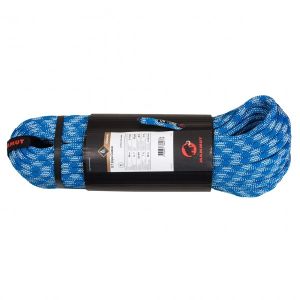 It all began 150 years ago in a small ropemaking workshop located in Switzerland. Today, Mammut is one of the most influential manufacturers for sport climbing, alpine, outdoor, and winter sports. It’s going to be hard for you to find a climber or mountain sports enthusiast who’s not familiar with the black mammoth logo.

The little ropemaking workshop has morphed into a global company, whose headquarters still remain in Seon, Switzerland. Mammut Sportsgroup now also operates offices and subsidiaries all around the world.

Although a lot of time has passed since the company's beginnings around 150 years ago, Mammut remains one of the leading climbing rope manufacturers to this day. The Swiss company has decades of experience in the development and production of climbing ropes. So, you can be certain that their half, twin, static and single ropes meet high safety standards.

Mammut now generates 50% of its sales, over 200 million Swiss francs, through clothing. They produce functional clothes for hill walking, trekking, climbing, bouldering, ski touring and some are even built to be worn on extreme alpine terrain.

In addition, Mammut also offers hard goods, such as head torches, backpacks, crash pads, carabiners and helmets. Through cooperations with other manufacturers, such as Ajungilak (sleeping bags) and Raichle (shoes), they were able to gain many years of experience and successfully expanded their product range.

In addition, Mammut is highly committed to environmental protection. They implement environmental protection measures at a product level, they use fair trade and organically produced cotton, recycled materials and they strictly control the origin of their down. Mammut also works closely with a company called bluesign technologies AG.

“We Care" – for clean production, animal welfare and a reduced footprint

In autumn 2018, Mammut launched "We Care”. Although the Swiss company was already committed to environmental protection and sustainability, "We Care" and all the following steps took the word commitment to a whole new level. What was their goal? To ensure clean production, animal welfare, a reduced footprint and an ethical production.

In order to emphasize the whole topic of sustainability, Mammut has joined the Sustainable Apparel Coalition (SAC), which is composed of over 200 companies, associations and organizations. The SAC has released the "Higg Index”, which is a web-based optimization tool whose goal is to reduce greenhouse gas emissions by 30% by 2030 and be emission-free by 2050.

In addition to its enormous product range, Mammut has also been attracting attention thanks to their spectacular marketing campaigns. These include breath-taking advertising shots, the European Outdoor Film Tour (E.O.F.T.), with which Mammut has been touring the German-speaking countries for several years, filling ever larger halls and cinemas, and of course the Mammut Peak project to celebrate Mammut’s 150th anniversary. The Peak Project consisted of 150 teams, ranging from amateurs to professionals, who were given the opportunity to climb a mountain of their choice. The project was a logistics masterpiece that produced spectacular images and videos, which were documented on a dedicated website. By the way, we were also there with a team!