Bergfreunde expert Hannes
"Welcome to Bergfreunde!"
A customer account offers many benefits:
View your order status and history
Delivery tracking
Personal shortlist
5 € voucher for signing up to our newsletter
Haven't got an account yet?

Sorting
Most popular
Brand
We haven't got any brands on offer matching your search "%". Please enter a different search term.
Recommended use
Weight
Price
Rating
0

Chalk – it offers an excellent grip 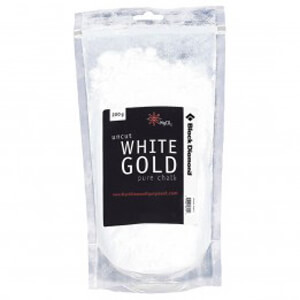 You’ve probably already seen that magic white dust that climbers use. It's called magnesium carbonate, which is better known as chalk in the climbing world. It’s used to dry your hands to prevent you from slipping when holding onto climbing holds. On hot summer days, it’s almost impossible to grab onto holds and slopers without the use of chalk.

You can’t use chalk everywhere

John Gill, the man known as the father of bouldering, is the one who introduced chalk to the world of climbing. It was first used in the USA but its use quickly spread around the world. Of course, many people were against the use of chalk. Not only did they consider magnesia as an illegal aid for climbing, but it also stained and destroyed crags. The latter is particularly true for sandstone. For example, the use of chalk whilst climbing is prohibited in Saxon Switzerland (an area in the eastern part of Germany that is famous for its beautiful sandstone formations).

The use of chalk balls and liquid chalk in climbing halls

Many people use chalk in climbing halls because the warm air rises closer to the ceiling. However, the use of powder chalk is often prohibited since there are many climbers in a confined space and this causes an increase in fine dust pollution. Chalk balls and liquid chalk are therefore great alternatives.