Sorting
Most popular
For
Size
Brand
We haven't got any brands on offer matching your search "%". Please enter a different search term.
Recommended use
Properties
Material
Sustainability
Colour
Price
Rating 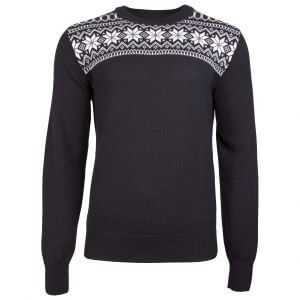 A traditional lusekofte, or Norwegian jumper, is a knitted jumper that has a specific colour pattern, usually consisting of two or a maximum of three colours. The tradition of Norwegian jumper dates back to the middle of the 19th century and originates from southern Norway.

Originally, Norwegian jumpers were only black and white and were primarily worn by men. Later, Norwegians usually added red as a third colour to their jumpers. Over the years, more and more colours and colour combinations were added. Traditionally made Norwegian jumpers for women, men and kids, however, are still limited to a rather subtle selection of colours and patterns nowadays.

Not every modern Norwegian jumper is made in Norway. Different types of wool and Merino wool are made into Norwegian jumpers in different parts of the world. They are characterised by pleasant warmth, they are odour-resistant and they will keep you warm even when damp.

Outdoor companies, such as Dale of Norway or Devold, like to use classic patterns in the production of functional Norwegian jumpers made of Merino wool and combine them with their own fashionable accents. The result is modern Norwegian jumpers that stylishly take the demands of modern clothing for trekking tours, winter hikes and skiing to a new level with classic elegance.