Canada Goose – the highest quality for the lowest temperatures

Warm, warmer, Canada Goose: for over 60 years, the traditional Canadian brand has been striving to get people through the coldest days in comfort. For this reason, all of its winter and expedition jackets come with a warm lining made of the highest quality goose down, as well as perfectly thought-out features. They produce great clothing that you can rely on wherever you go – whether you’re a ranger in the Canadian outback, an Alpine climber on the tallest summits on earth, or someone trying to get through the big city winter. » Read more 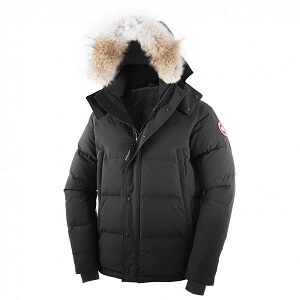 It’s no coincidence that Canada Goose was founded in one of the coldest countries on earth. Long winters are a part of Canada’s identity, just like the tough conditions and huge natural and wildlife areas. Here, you quickly learn what you need to overcome the most diverse climatic challenges. That’s one of the reasons why Canada Goose not only makes classic down jackets, but also has ultra-lightweight models and technical hardshells. No matter what adventures the great outdoors has in store for you, Canada Goose has the perfect clothes and equipment for every need!

Canada Goose has been producing warm clothing for outdoor adventures since the 1950s. Their expedition parka "Big Red" was developed for use at the McMurdo Station in Antarctica and is what gave rise to their fame. In the 1980s, the down parka went from being a life-saving piece of equipment for scientists in the polar regions to a basic piece of equipment for expeditions all over the world. The first Canadian’s successful ascent of Mount Everest in 1982 was done whilst wearing a specially-designed expedition parka from Canada Goose.

Made in Canada’s rise in popularity

In the 1990s, Dani Reiss, the grandson of then-founder Sam Tick, took over as head of Canada Goose and worked hard to grow and expand the brand globally. In the process, "Made in Canada" became a sign of outstanding quality, tradition and innovative development in the production of high-quality functional textiles and especially in the processing of the best down to create the warmest down jackets.

High performance athletes, such as multiple-time winner of the Yukon Quest dog sled race Lance Mackey and South Pole record setter Ray Zahab, swear by their Canada Goose expedition gear. Both athletes know the arctic’s harsh conditions and know how important it is to be optimally equipped for such adventures.

The best choice for in front of and behind the camera

Canada Goose has long been an insider's tip when it comes to filming in extreme colds. Whether in Canada, Tierra del Fuego, Siberia or in the polar regions, numerous camera teams, actors and crew members have been arming themselves for years with the warm down jackets to shield themselves against the icy cold during filming.

In 2004, Canada Goose even made an appearance in Hollywood. In the movies "The Day After Tomorrow" and "National Treasure," the protagonists protect themselves from the life-threatening cold with the help of Canada Goose down jackets. These appearances made the Canadian brand go from being a hidden gem for people in the film industry into a well-known manufacturer for professional expeditions. The round logo with the Antarctic continent therefore turned into an unmistakable symbol for the Canadian down specialist and since then, many companies have collaborated with Canada Goose. The Canadian brand designs the warmest down jackets that can take on the lowest temperatures.