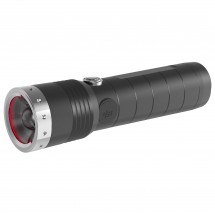 (5)
You are familiar with this product?

You have actually had one of these products? Tried and tested?
Other customers will be very happy to read your review – share what you know with them.

Just so much light from such a small device. Only had this a few days but feel this will always be in my backpack whether commuting or clambering. The lowest setting on the widest beam is bright enough to assist walking on a dark path. The brightest setting is piercing and simply glorious in how far it illuminates. The strobe mode is nice.

The battery is separate in the pack and arrives fully charged. Woo-hoo, immediate playtime! The base cap is smooth but graspable so removing it to put in the battery isn't too much hassle.

I think I like the power button in what might be considered the normal place on the side instead of in the base because I'm not a government agent searching in the woods.

I am always apprehensive about rubber covers over charge ports, being concerned about how long they will last compared to the solid construction of the torch in general. I would prefer it in the base, since there is available space, but that is probably a design nightmare and I do expect the company to know how to put a torch together.

In my initial excitement I did overlook the focus lock. You know, the thing indicated by the writing, in clear text, on the moveable head that I must have adjusted a few times and thought a little stiff (but seemed similar to an older regular battery powered Ledlenser I have). It works fine and even when unlocked although the head moves smoothly it still has some resistance.

Product images by Martin
Yes, I would recommend this product to a friend

Yes, I would recommend this product to a friend

A quality product at a sensible price. Very bright and great to use. Focus works well. Only had the torch for a week but feels like it will last well.

Yes, I would recommend this product to a friend

83% have found the reviews
by Moritz helpful

0
0
Product images by Moritz
Yes, I would recommend this product to a friend
€ 5 now
For your next order
No thank you.
<![endif]-->