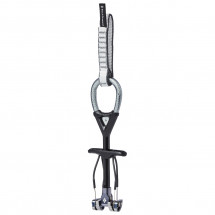 (6)
You are familiar with this product?

You have actually had one of these products? Tried and tested?
Other customers will be very happy to read your review – share what you know with them.

18% have found the reviews
by Kevin helpful

0
1
Yes, I would recommend this product to a friend

66% have found the reviews
by Tom helpful

1
0
Yes, I would recommend this product to a friend

88% have found the reviews
by Remigi helpful

0
0
Yes, I would recommend this product to a friend

Got three of these, so I am an early adopter. Been using them on the grit in place of my wild country helium friends. They are incredibly light, so make the climbing easier as you are weighed down less. Only taken one small leader fall onto one so far. Lots of faith in them and looking forward to using them in the next couple of weeks in LLanberis on the rhyolite and then on the Piz Badile in July, confident that they will be awesome due to the lightness alone. One negative just for balance, they do feel a bit short to place, although I do not think they are actually shorter than other cams, just feel it and also of course a double sling would be useful. However at the end of the day, not falling in the first place is the best option and lighter gear just makes the moves easier.

Yes, I would recommend this product to a friend
€ 5 now
For your next order
No thank you.
<![endif]-->